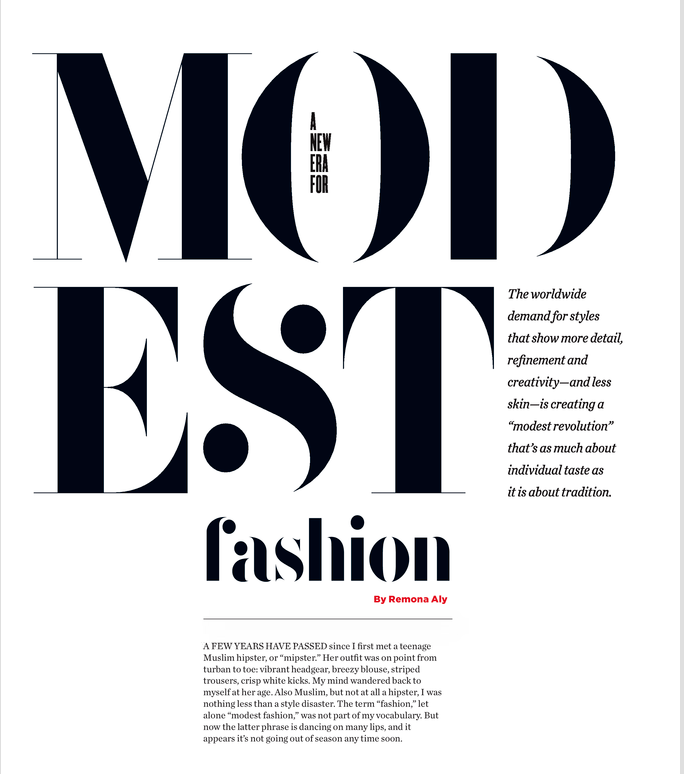 A New Era for Modest Fashion

A few years have passed since I first met a teenage Muslim hipster, or “mipster”. Her outfit was on point from turban to toe: vibrant headgear, breezy blouse, striped trousers, crisp white kicks. My mind wandered back to myself at her age, I was nothing less than a style disaster. The term ‘fashion’ let alone ‘modest fashion’ did not enter my vocabulary. But now the term is dancing on many lips, and it appears it’s not going out of season any time soon.

Rather there seems to be a paradigm shift underway in the fashion world, as the modestwear movement claims increasing attention from major brands and designers get imaginative with an extra length of material here and there. At fashion weeks in London, Paris, New York and Milan, hijab iterations for Fall/Winter 2018 became true catwalk couture. Designers interpreted the traditional headcover in embellished floral motifs on royal blue (Gucci), in vibrant orange jersey (Lanvin), and in bold colours topped with a tartan beret (Versace).

E-commerce venture TheModist.com has been a key player in the modestwear revolution. Its founder and CEO, Ghizlan Guenez, noticed luxury brands’ interest in Muslim audiences and social media’s pivotal role in bringing modest fashion to the fore. Women were expressing themselves through dress all over the world and TheModist.com tapped into that global sentiment, launching on International Women’s Day last year. The site delivers on its tagline of “Modest Fashion, Modest Thinking” with curated designs from an A-Z list of brands – including Alberta Ferretti, Yuliya Magdych, and Zeus + Dione, complemented by rich editorial content. With giant clothing retailers such as Marks & Spencer and H&M launching their first modest collections this year, it’s plain obvious that such garments have both high street and high end appeal.

On the red carpet stars, modestwear has found the starry spotlight. Last year, singer Adele swooped up a Grammy award while dressed in a floor-length, long sleeved gown by Givenchy in deep olive-green; and actor Lindsay Lohan stole the show when she wore a Gucci porcelain garden full-length dress with high ruffled neck at a charity iftar dinner held in London. And the attention isn’t limited to designers and celebrities: the world of modest fashion is expanding and creating new roles such as modest stylists and new markets such as modest bridalwear.

The magnetism of modestwear is undeniable. For many, it is rooted in religious values, championed by Muslim fashionistas in the blogosphere who highlighted the need for modish modesty. For others, the appeal is rooted in a desire to achieve elegance without baring too much skin.

“The reason modest fashion appeals to mainstream consumers who may not necessarily adhere to faith-based principles brought behind this sense of dressing, is because modest fashion has always been associated with class, decency and dignity,” says Alia Khan, chairwoman of Islamic Fashion and Design Council (IFDC) which offers comprehensive support to the unmistakably profitable segment of the fashion and design industry.

A (NOT SO) MODEST INVESTMENT

Covered up chic is hot business. The Muslim clothing market has been valued at USD 254 billion and Muslim shoppers are expected to spend a mammoth USD 373 billion on fashion by 2020. Big brands have been tapping into this colossal spending power for several years. Italian fashion house Dolce & Gabbana launched a luxury range of abayas and hijabs targeting Middle Eastern audiences in 2016, while labels like DKNY, Mango and Tommy Hilfiger launched one off Ramadan collections in 2014/15; some revisited the market to offer Ramadan capsule collections for 2017/18. This year, Michael Kors curated a special collection for the holy month, featuring elegant kaftans and accessories with striking geometrical designs. And Oscar de La Renta was one of 10 big fashion houses to team up with Net a Porter for Ramadan, bringing a breathtaking collection of shimmering gold dresses, white cape gowns and vibrant fuchsia kaftans.

In April, the IFDC hosted the first-ever Pret-A-Cover Buyers Lane show in Dubai. Khan has been a pioneer, acting as a bridge in the market space and channelling her Islamic fashion know-how into mainstream brands. “It’s an exciting time to be in this space,” she says. “IFDC is rapidly building a narrative that is developing a sense of respect and understanding for this market. Add in the superior spending power and commercial viability, and you have an industry that’s hard to overlook.”

According to Shelina Janmohamed, vice president of Ogilvy Noor, it’s steadily on the rise. Ogilvy Noor, part of Ogilvy & Maher, is a bespoke consultancy on Islamic branding. “Modest fashion is already a huge market, with some estimates putting it at nearly $500billion every year,” she says. “This is set to grow year on year, partly due to the growing young Muslim demographic but also the wider appeal of modest fashion.”

THE ELEMENTS OF STYLE

A classy look “resonates personal values and character,” Khan says. “Think back to the classical era of Grace Kelly, Audrey Hepburn and other celebrities of that time; when they would tie their scarves in a hijab style manner it was considered chic, throw on a pair of sunglasses and it catapulted to the epitome of glamorous yet classy.” This kind of elegance is exemplified today by royal fashion icons – Queen Rania Al Abdullah of Jordan; Sheikha Mozah bint Nasser Al Missned of Qatar; and Catherine, Duchess of Cambridge (better known as Kate Middleton) – and continues to draw admiration and emulation all over the world. “Modesty never goes out of style,” Khan says, “it will always be relatable.”

Consider the influence of Malaysian pop star, Yuna. The multi-award-winning musician has millions of fans who also appreciate her creative modest-chic aesthetic. Known for her trademark turbans, vibrant colours and tailored cuts, Yuna’s gained more widespread attention when she worked with singer and producer Pharrell Williams in 2012 and later collaborated with singer Usher on a duet.

Yuna wears her Islamic principles with pride, educating those who misinterpret her style as externally imposed and oppressive. On the contrary, she sees it as freeing. “I think modest fashion is becoming popular in the West probably because a lot of women who choose to practise their faith or modesty freely are more confident in expressing themselves creatively,” she says. “My style represents my identity as a Muslim woman and also my personality. I think for a lot of women, even those who dress modestly, they just want to be accepted as themselves.”

While Yuna’s home country of Malaysia has hosted Kuala Lumpur Fashion Week for more than a decade, Saudi Arabia held its first ever fashion week in April in Riyadh. Organised by Arab Fashion Council, it had a strictly women-only audience with no social media allowed, and featured giant designer names such as Jean Paul Gaultier who flew in his Autumn/Winter 2018 collection. A couple of months before that, London Modest Fashion Week, organised by Haute Elan – an innovative marketplace platform for luxury modest fashion – ran concurrently with London Fashion Week.

Growth in modest fashion’s popularity isn’t likely to wane. In addition to her work with Ogilvy Noor, Janmohamed has authored several books, ‘Generation M: Young Muslims Changing the World’. These young people, Janmohamed says, are part of a segment who Janmohamed says, believe “faith and modernity go hand in hand”. The modest fashion platform is very much female-led, she adds: “Young Muslim women are the creators of the modest fashion aesthetic and marketplace. For these young women, modest clothing is a non-negotiable for their faith identity, but they also want a contemporary look as they believe fashion is just as much for them as anyone else. They also see fashion as a way to challenge stereotypes and build bridges.”

In the modest fashion revolution, women are claiming agency through their sartorial choices and declaring to the world that, for them, covering up is liberating. “What empowers more than giving everyone a sense of respect, tolerance, and appreciation?” Khan asks, “I genuinely believe it’s the key to empowerment and we can all bring more of it through our respective work. If we can deliver this, we are all influencers.”