THAT PODCAST: Where We Say Goodbye

THAT PODCAST: Where we say goodbye to those we have lost 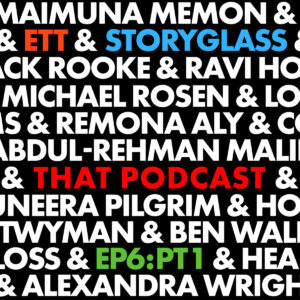 Click here to listen: THAT PODCAST… where we say goodbye to those we have lost, and talk about grief and healing – Episode 6:1

Hosted by Remona Aly, the final episode of the series looks at what we have lost over the last year. Exploring how we can talk about feelings of loss and grief, and the rituals that can help us to say goodbye.

In Part 2, host Remona Aly tries to see the bigger picture, looking at what we can learn from those that have experienced grief from a different perspective. We also look to the younger generation to see what grief for a lost future looks like, and begin to talk about healing.

Featuring testimonials from the public on what the last year has taken from them and taught them in return, a personal reflection from playwright David Edgar, a piece by poet Eddie Doyle, an interview with Dr Erica Borgstrom and music from Maimuna Memon.

THAT PODCAST is a Storyglass and ETT co-production.

To find out more about the 12 part magazine-style podcast series, please click here.

This site uses cookies to ensure you get the best experience. If you continue to use this site we will assume that you are happy with it.Ok