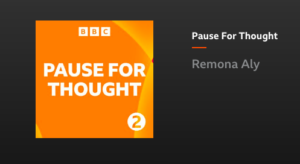 I used to be a bit of that old term, a tomboy, as a kid, often preferring my brother’s Transformers to my Peaches ’n’ Cream Barbie doll. As a teen I’d scour his vinyl collection of hard rock and headbang around the bedroom. As I grew older, I’d crack jokes, feign over-confidence and be the clown at the party, acting like I was well ‘ard.

But the truth is, it doesn’t matter if I’m 4, 14, or 40, being too sensitive is my constant hidden weakness, my heart like a tub of soft ice cream that’s been left out of the freezer too long.

When I started writing articles for a living, the nasty comments they’d draw for no other reason than my being a Muslim, would sting, despite friends telling me, “Don’t let them get to you. Grow thicker skin.”

I wish I cared a little less. But sometimes a harsh jibe scratches like thorns, and a rejection sears like flame, no matter how hard I try to let things wash over me.

In the Arabian city of Medina fourteen centuries ago, Prophet Muhammad, peace be upon him, openly showed his vulnerability when he lost his beloved infant son to an illness. The Prophet was a warrior, a role model, and reminded people to focus on the afterlife. He grew up in a society where masculinity meant not showing your emotions, but here he was, tears rolling down his cheeks, as he stood by his son’s grave and wept in front of his people. A companion said to him, “Even you are crying, O Messenger of God?” meaning, how could such a strong leader with unbreakable faith, break down. But the Prophet replied, “This is mercy.”

While I’ve tried to harden myself against my own nature, I’ll try to remember it’s a mercy to my own soul to let the tears fall from time to time; a mercy not to deny the bruises my heart bears, as I submit to the grace of my own vulnerability.